How to wake a Sleeping Giant | Gage Roads Brew Co. 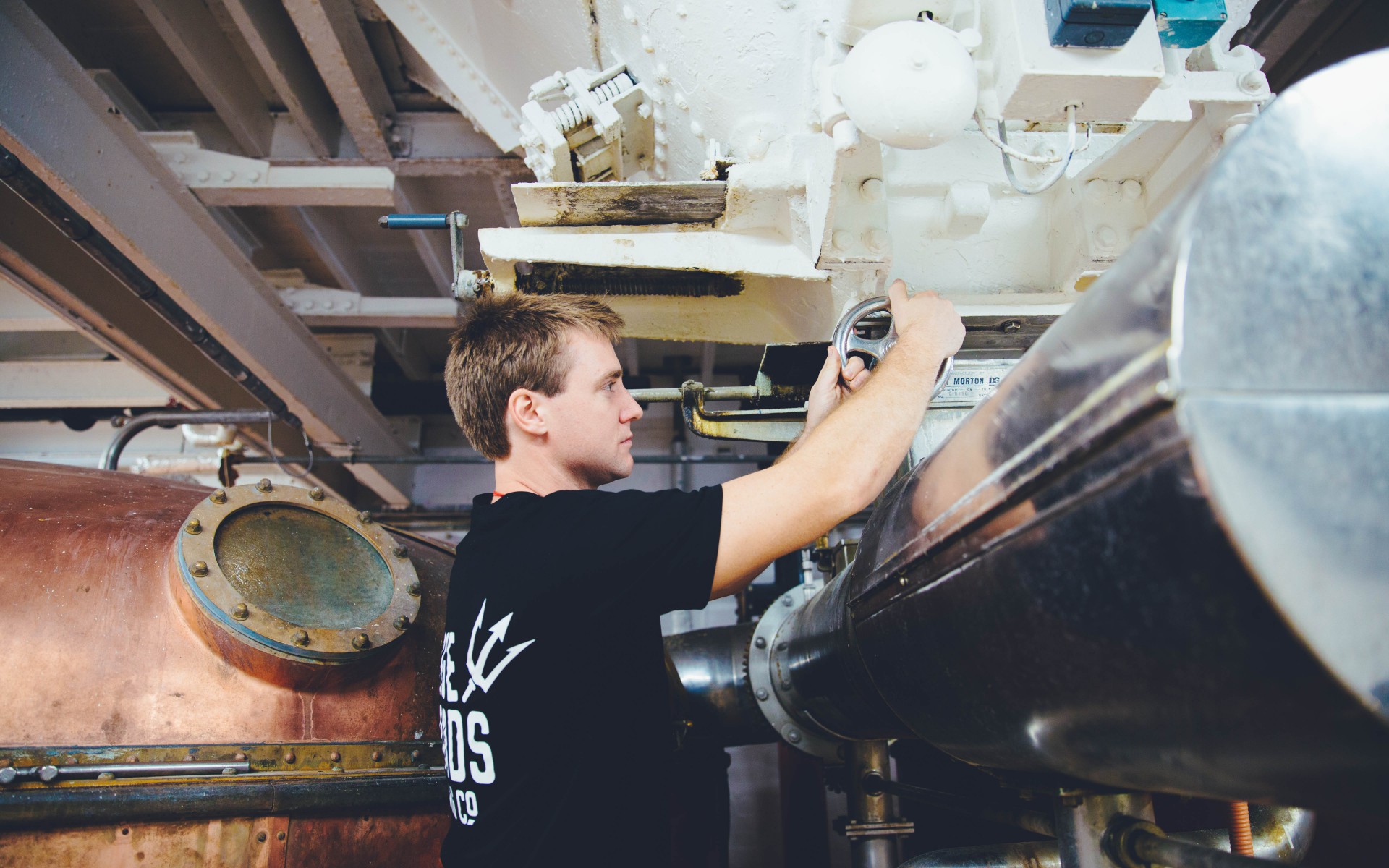 Casks. No, not cardboard boxes of goon, but large, metal barrels filled with live, unpasteurised ‘Real Ale’. Last month, we sent resident brewer/lucky bastard Cam Parker all the way to Wolverhampton in the UK to fill 1400 of them in a first-of-it’s-kind collaboration between Gage Roads and Marston’s Brewing Co. The beer, our Sleeping Giant IPA, was brewed at Banks’ The Park Brewery, and the casks will be distributed for serving in 700 J.D Wetherspoon venues across the UK.

Here’s how it all went down.

Braumeister Cam Parker of House Gage, first of his name, Lord of Absolon. In other words, I’m a brewery team leader at Gage Roads.

So you recently took a trip to the UK to brew up some Sleeping Giant IPA. How did this come about?

I was in the mother country last year for my brother in law’s wedding when I met my fiancé’s aunty, who is a director for Wetherspoon’s (a large chain of pubs). When she found that out I was a brewer that didn’t make pale adjunct lager, she invited me over to brew one of our beers with their crew.

Sounds amazing. It must have been quite surreal brewing in another country

Yeah it was! I really got my nerd on in the brewery. It’s way bigger than our brewery here and has been running for such a long time that it’s become an incredibly well-oiled machine. Their procedures were really impressive and their brew teams work really well together. It’s no wonder they’re one of the largest producers of cask ale in the world! Tell us about their brewing process.

The brewing process is similar to how we brew here, except that it was an open fermentation, which was chilled before completion. This allows a secondary fermentation to take place in the cask with the fermentable sugars and yeast left behind. We started the mash in the morning in large copper tuns, which is pretty old-school, given that most modern tuns are stainless steel. We had three separate mashes which were run off into a kettle for a volume of 60,000 litres. Not quite as much as the great beer flood of 1814, but a lot of beer nonetheless! This was boiled, hopped and chilled as usual, but fermented in open top square vessels, which is very different to how we ferment here. After a few days the yeast was removed and beer was dry-hopped for aroma, which was done a lot sooner than we do here. Then the beer is chilled and placed in a cask where it is allowed to ferment further to provide a small amount of CO2 for carbonation.

Was this the first time you had brewed for casks?

It wasn’t my first time brewing cask ales. When I decided to become a brewer I volunteered at a brewery called Goddard’s for eight weeks in the south of England. That experience really helped me get my foot in the door within the industry. Converting barrels to hectolitres must have been challenging?

It was, I was caught off guard there! I few times I had to Google the conversion on my smartphone to make sure I was putting the right amount of ingredients in, but we got there in the end…I think. The perks of modern technology! How did the equipment differ?

The equipment was incredibly different from what we have here, they don’t have a lauter tun or a whirlpool, Instead, they brew into three copper mash tuns = and run off the wort from all three into a massive kettle. They also ferment in open top square fermenters, which – despite common misconceptions about British bathing habits – is testament to their hygiene skills! I joked to my boss when I got back that I am never cleaning a fermenter again.

It is! But, because I was only over there for a week I will never get to try it. It is currently being distributed to all 700 J.D Wetherspoons across the U.K. (presumably NOT by draughthorse).

So did you get a chance to sample the local produce?

The brewers definitely looked after me. We went out on the town in Birmingham. We must have staggered around to five or six craft beer bars (I forget) and I sampled my fair share of local cask ales.

When and where can it be quaffed?

Would you do it again?