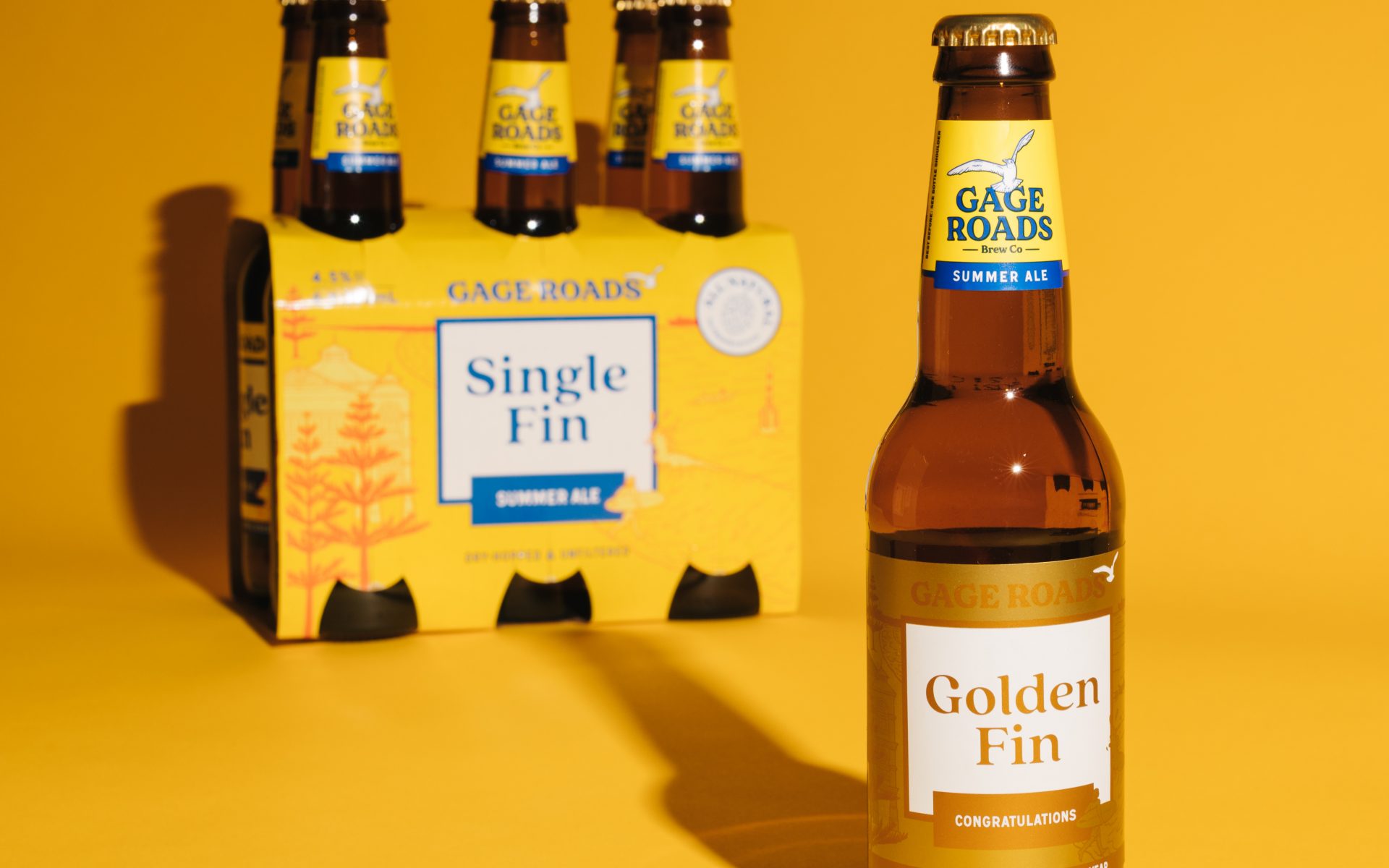 Will you find the Gage Roads Golden Fin & win beer for a year?

The hunt for the Golden Fin is underway!

That’s right, if you’re lucky enough to find the Golden Fin, you’ll be set for summer (and beyond) with 15 cartons of fresh Gage Roads froths heading your way. That’s pretty much a beer a day for a year! Also, if you’re the WA winner, you and a mate will receive a personal brewery tour and tasting with our head brewer.

Hidden inside a regular Single Fin six-pack, the exact whereabouts of the Golden Fin is unknown. There’s only one way to find it – head down to your local bottle shop, cross your fingers and pick up some Single Fin.

“We all remember the fun of Charlie and the Chocolate Factory’s Golden Ticket. We wanted to re-create that for Gage fans. The great thing about the Golden Fin is anyone can win. It all comes down to luck and whoever happens to grab the lucky six-pack from their local bottle shop,” says Bec Lauchlan from Gage Roads Brew Co.

As you can see, the Golden Fin looks exactly like a Golden Fin! The traditional Single Fin bottle label has been replaced with a “Golden Fin” version. You won’t be able to see it inside the six-pack, so the lucky winner won’t know they’ve struck gold until they get home and crack open a beer.

“The Golden Fin looks pretty cool, but we’ve made sure it remains hidden inside the six-pack, so you can’t see it from the outside. We have no idea where the special Golden Fin has gone – except that there is only one in each state (WA, QLD, VIC & SA).

“We have no idea how long it will take to be found. It could be a day, a few days or even a week. But once the Golden Fin is claimed, we’ll announce it on our socials,” says Bec.

Instructions on how redeem the prize is printed on the ‘Golden Fin’ Label. By participating in this promotion, entrants agree to be bound by these terms and conditions.

Entry is open to all residents of Australia aged 18 and over. Photo identification will be required for collection of the prize.

Employees of Gage Roads Brewing Co and the promoter and their subsidiaries and immediate families, agents, sponsors or any persons connected with devising or promotion of this competition are ineligible to enter.

This is a competition of chance that gives customers the opportunity to go into the draw for four (4) major prizes – one in each state of WA, QLD, VIC and SA.

To win, a shopper must purchase Single Fin from the participating retailer and discover the Golden Fin. The winner must post on social media, tagging gage roads and the retailer they purchased the winning product from and also email info@gageroads.com.au declaring the unique code printed on the label. By redeeming the Golden Fin Prize you are agreeing to the terms & conditions.

USE OF PHOTOS etc

It is a condition of entering this competition that contestants consent to their telephone and other conversations with Gage Roads Brew Co.

All contestants release from Gage Roads Brew Co, against all liability, cost, loss or expense arising out of acceptance of any prize(s) or participation in this competition including (but not limited to) loss of income, personal injury, accident or death and damage to property and whether direct or consequential, foreseeable, due to any negligent act or omission or otherwise.

The Promoter and associated agencies accept no responsibility for any loss, damage, accident, death or injury resulting from the promotion.

The Major Prize winner is required to redeem their prize once found my tagging gage Roads on social media and emailing info@gageroads.com.au. The Promoter will make every attempt to contact the winner; if however a winner does not respond to direct message or email  within 7 days of initial contact being made, the winner will forfeit their prize.

Gage Roads Brew Co reserves the right to alter or amend these terms and conditions at any time throughout the promotion.

Gage Roads Brew Co, will not be responsible or liable if for any reason beyond their reasonable control any element of any prize is not provided.

Yeow! Check out our new podcast

Need to step up your Zoom meeting game?