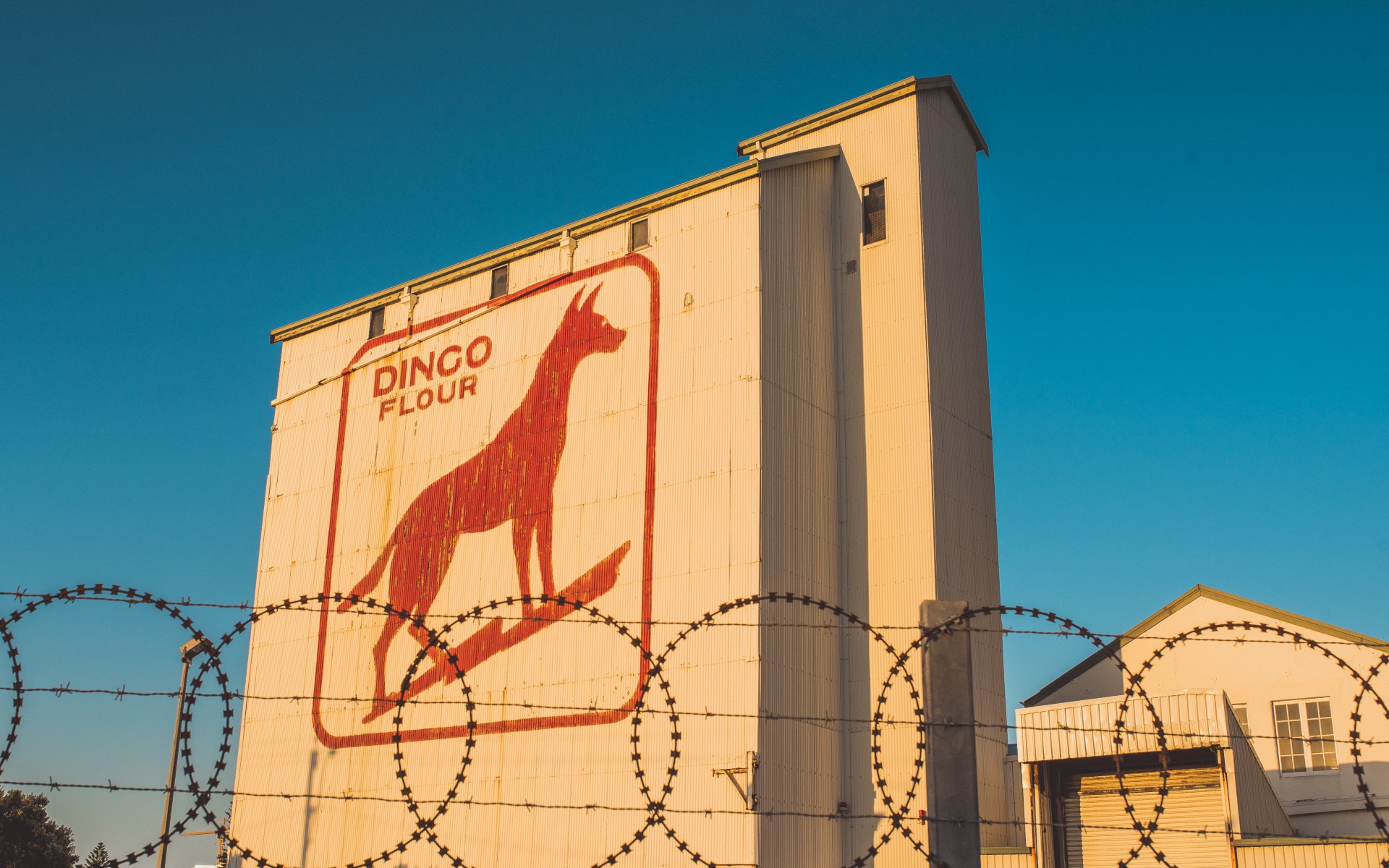 If there’s one thing that’s true about Leighton Beach’s iconic Dingo Flour sign, it’s that nothings as it seems. The who, what, where, when and why of The Dingo are as hotly contested as any other. We recently dug a little deeper and clued ourselves in, so let’s play a game of true or false and see if we can settle things once and for all.

The company is called Dingo Flour
False
There’s a reason why it’s more common to see the Dingo emblazoned across merch and cheap t-shirts than on supermarket shelves. Ironically, Dingo Flour has nothing to do with the flour mill’s name. It was originally called the Great Southern Flour Mill back in 1922 before it amalgamated with a union of mills across Australia to become part of Allied Mills.

The mill is still in operation

True
Most people assume the mill shut down years ago, but she’s still kicking, pumping out mounds of the white stuff daily. The mill is one of the largest in the state, and the only one still operating within a metropolitan area.

The sign was painted by late beer tycoon Alan Bond
False!
Although this is a great story to laugh about over a few beers, it remains one of Freo’s great tall tales. Like all great tall tales, it takes some explaining. The real legend we have to thank for our very own answer to the Statue of Liberty is a local lad by the name of Les Nash. Back in the early 1940s, Forty Pounds Stirling got you a sign from Davies Sign Service, hand painted with brush and bucket by our very own Les. Les’ handiwork (and pièce de résistance) was set to endure for all-time, until 3 years later when the local authorities took to it with white-out as part of wartime precautions.
This is where old mate Bondy comes in. Alan had a colourful career – spreading himself across multiple industries and ventures including the ill-fated Bond Brewing – but it all began with an apprenticeship at Parnell Signs. Parnell Signs won a bid to bring the sign back to life postwar. We can only assume that Bondy couldn’t keep his brush clean – as according to Parnell’s son – Mr. Bond “was never involved in that kind of work”. Case closed.

The dingo was originally blind
True(ish)
Look, it’s technically impossible for some red paint on metal to have vision, but Les Nash’s pre-War Dingo was blind as a bat, figuratively speaking. Either through design or indifference, Les’ Dingo had no eye. Like all artists, Fred Parnell couldn’t resist adding his own flair to The Dingo when he was commissioned to repaint it in the 40s. Fred’s flourish wasn’t too drastic though, adding an eye and little else to the distinctive sign. In doing so, Fred granted The Dingo the best view on the coast forevermore.

The sign is painted every month
Definitely false
Sea air can be a cruel and unrelenting mistress, and no one knows her ire better than our friend the Dingo.
The salt-laden sea breeze takes its toll on the mill’s corrugated sheets, but sources at the mill (and that fact we drive past it a fair bit) tell us that there’s no truth to the story of a monthly touchup routine.
What we do know to be true is that mother nature always comes out on top. At this point the weather-beaten corrugated sheets on which The Dingo is painted need complete replacing. Thankfully, our State Government recognises the iconic status of the sign, contributing a tidy sum to its upkeep each year.

The land has sacred significance
True
There’s a beautiful Nyungar dreamtime story about the land on which The Dingo stands. Fittingly, it too features a dingo watching over the coastline. After a fight between the Waugal (a snake-like creation spirit) and a destructive crocodile spirit, Dwert (the dingo spirit) was asked to stand sentinel over the coastline, preventing the crocodile spirit from wreaking havoc again. The story of the Waugal, the croc, and Dwert takes place on the land of which the Dingo Flour sign now stands. It’s nice to think that both sign and spirit offer their own brand of guardianship over the coastline (especially the waters of Gage Roads).

If that’s not the coolest story behind the sign, then I don’t know what is.