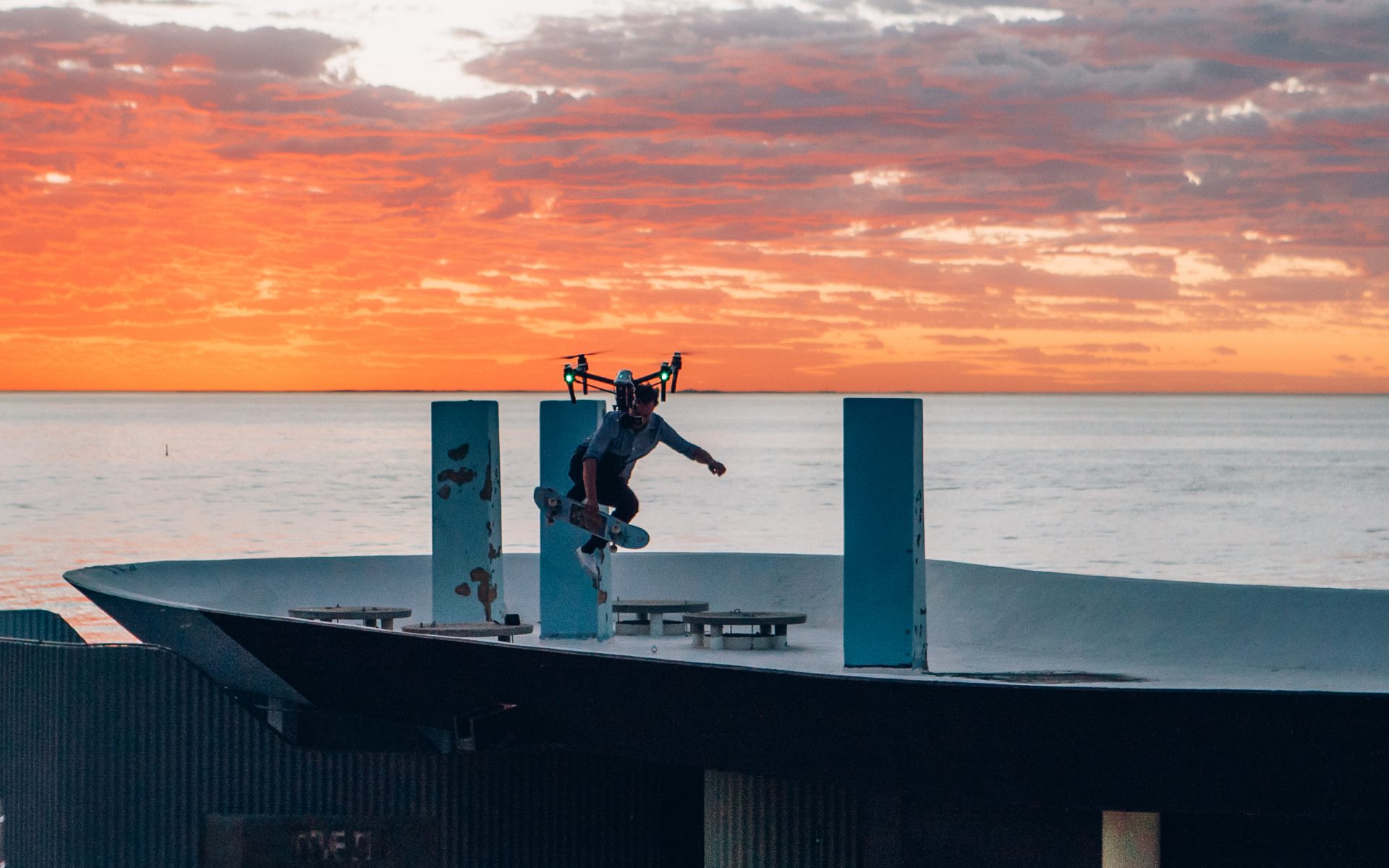 In an oversaturated landscape one must pivot creatively to stand out and be truly individual, and Kyle Bowman a.k.a. Airloft has done exactly that. Combing his long-standing love for aerial photography with skateboarding, Kyle has discovered a new-fangled approach to capturing the art of skateboarding. He combines unusual perspectives with isolated elements to create compositions which evoke a sense of art over sport.

You were still kicking it in high school when you were first introduced to the world of drones, tell us a little about that.

Yeah, I guess it will sound cliché, but I was into it all a while before its huge rise in popularity. It started with my old man (we’re both huge nerds) and we built a few quads (drones) in the early 2000s just for fun. I ended up strapping a GoPro onto them and have been fascinated with aerial imagery ever since.

You’re a seasoned photographer, what inspired you to predominantly shoot from above?

I guess what I love most about it is the freedom. Creatively, you can do almost anything you can imagine. Drone photography is a very saturated market; how do you stand out from the crowd?

I’m doing my best not to respond with clichés here, but it’s attention to the detail. Aerial photos & videos are everywhere, so it’s not going to grab anyone’s attention just because it’s been shot with a drone.

You have found a niche within a niche being aerial skate photography. How did this come about?

I have a lot of friends that skate and I’m lucky that a few of them are really, really good at it. It’s definitely just come about naturally – I like shooting aerial photos, they like skating.

It’s also cool because it’s a sport that hasn’t been hit by the drone craze as hard as some, like surfing. That said, there are definitely examples; the recent Vans, Birdhouse and Volcom videos used them a fair bit. You’re capturing a lifestyle from an entirely new perspective, how are people reacting?

Overall, super positive! However, with the recent explosion in popularity, a fair portion of people seem to be pretty concerned with the privacy implications. That’s the only negative interactions I’ve had with people. But most of them end up intrigued when you just chat and explain what you are/aren’t doing.

The style and observational connection to your subject seems somewhat surreal, why do you think this is so?

I think it’s just because it lets everyone observe something they’ve probably never seen before, just from an entirely new perspective. I still get amazed at times how different and interesting everyday things can look from an elevated perspective. What elements in the landscape do you seek to create a great aerial shot?

I guess it’s always about the light. It’s the one thing that always makes a photo. It’s the reason I often end up going back to the same location multiple times before finally being happy with a photo I want to take. Soft, low light either early in the morning or late in the arvo is always going to be your best friend for aerial shots.