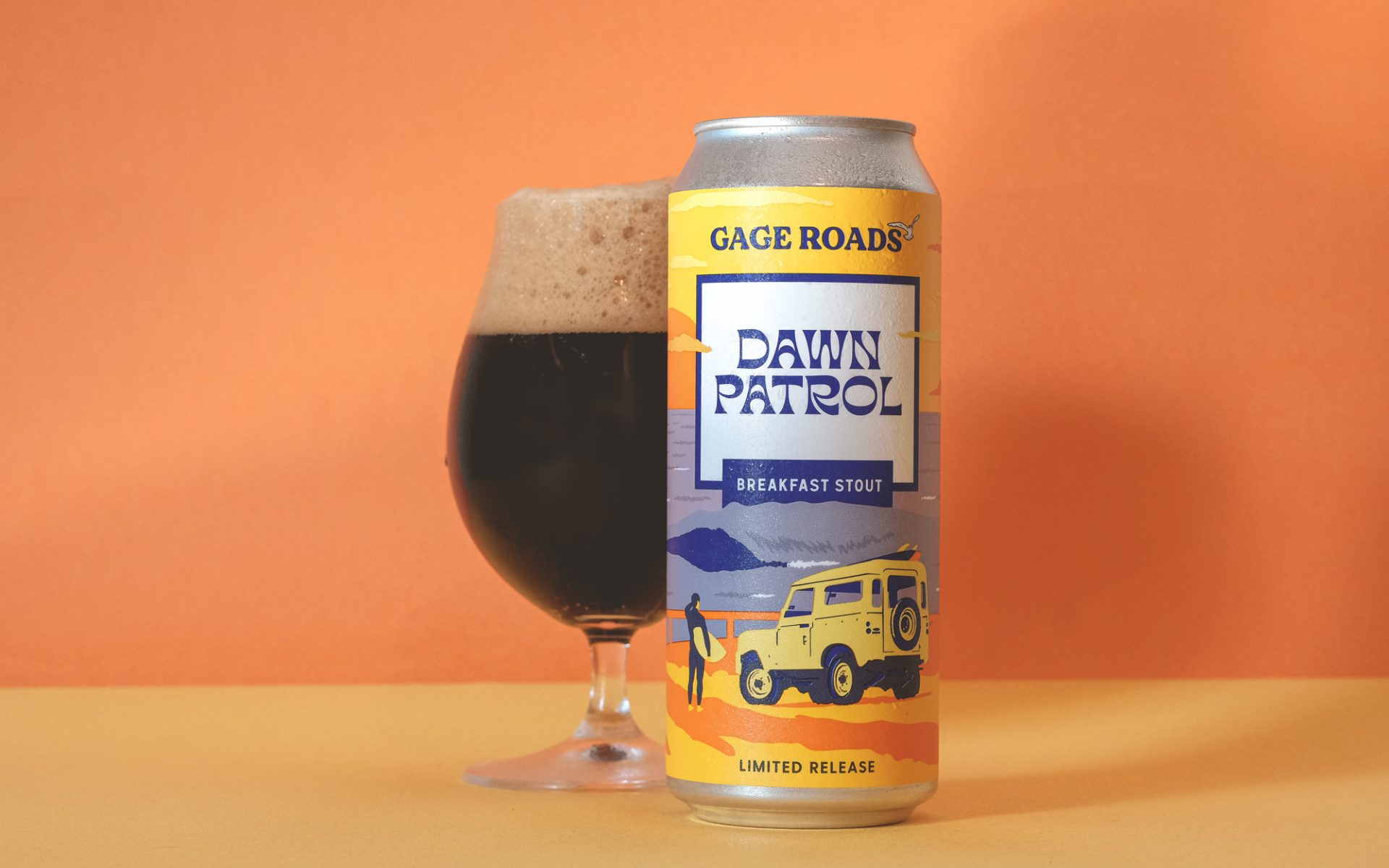 It’s 9.30am on a Wednesday, and as the weight of hump-day morning tries to take hold, I’m in luck. Luke from Twin Peaks Coffee Roasters passes over a cup of the good stuff.

“What kind of host would I be if I didn’t get you a coffee to start?”

His timing is bang on. Not only that, but this brew is bloody good. As I sip away, Luke explains that what I’m tasting is an upcoming limited release, with a few bags of beans sourced from a small producer in Colombia. He describes it as juicy. And he’s dead right. Not overly bitter, this brew has a ripe, yet balanced sweetness. It’s a pretty good way to kick start a Wednesday.

Like pretty much every day of the year, Luke is here at Twin Peaks HQ with his mate, and owner Tom Greene. While we’re enjoying our caffeine hit, Tom explains the range of their staple brews and limited varieties.

“We have a small core-range of our flagship offerings, being our blends. That’s your bread and butter, for the day-to-day milk coffee drinker. But we also pride ourselves on our micro-lot program, these are higher end coffees that are predominantly roasted for black drinkers in mind. They’re single producers, single farms and often lot separated from a larger lots and processed in a myriad of ways. It’s such an awesome challenge and keeps it very exciting, and we do find ourselves partnering with those producers again, year in and year out,” explains Tom.

Brewers and roasters are peas in a pod

While we chat, it’s quick to see that coffee roasters and brewers share a lot of the same qualities, and the gigs have a fair bit of overlap too. It extends far beyond core-range and limited release brews. There’s a romantic dance between science and gutfeel. Trusting both is important. I see that when Tom shows me how the roaster works. Taking 30 kilos of beans at a time, the stainless-steel machine is hooked up to two screens – both spitting out numbers and graphs while beeping warnings and instructions. It reminds me in some ways of the brewery control room, where brewers monitor the goings-on of the brewhouse. Both screens look like life-support machines and in many ways monitor the health of what’s being created inside. However, despite all the data in the world, you always essential to roll up the sleeves, take a look inside and taste the product at different stages. That’s often the best judge of where things are at.

Brewers and coffee roasters are also dedicated to hunting down the best raw ingredients. Much like Gage head brewer Ross Brown heading to Yakima Valley in the US for hop harvest, the Twin Peaks lads have ventured to South America to meet with local coffee farmers, finding the best beans and learning more about the whole process.

“It’s quite a direct relationship. Since 2017, we’ve been able to be more connected and closer to origin for coffees such as the Brazil Sertao that we’ve used for Dawn Patrol,” explains Tom.

Luke explains that these pre-Covid trips really helped to grow and shape understanding of not only the product, but the people behind it.

“Once you get over there it’s a whole new world. Being there and seeing the agricultural processes on the ground is eye-opening. Being there in the flesh and seeing coffee grow and eating ripe coffee cherries on the tree is a pretty cool experience.”

Ross says there are similarities in technique, as well as procurement.

“There’s some crossover, as far as how they analyse the coffee samples, with the sensory techniques they have. Also, when you’re dealing with a natural product like that, there’s definitely some parallels with what Twin Peaks do and what we do, when sourcing our raw ingredients,” says Ross.

With the roaster howling away in the background, the room is starting to heat up. Hoodies have no place here, even at this time of year. With our coffee cups empty, it’s time to test the reason we’re here. Beer!

Coming together for a Dawn Patrol

Gage and Twin Peaks have teamed up to release the limited edition, Dawn Patrol Breakfast Stout. And this one’s been a bit of a journey. Dawn Patrol was the public vote winner of the Gage Roads “You Vote, We Brew” competition, where thousands of beer lovers decided our next limited release. With the election over and the result confirmed, it was time to get to the beer. After getting together with Twin Peaks, the next few months involved catch up over coffee and beer, with chats around flavour, process, technique, and brewing. There were also tastings. Lots of tastings. Tough bloody work.

Gage head brewer Ross Brown says the process was a heap of fun.

“Teaming up with Tom and Luke from Twin Peaks was an awesome experience. The guys are as passionate about their coffee as we are about our beer. The collaborative process of selecting the coffee blend, assessing the flavour profile of different coffee brewing methods and then scaling up to brew 200kg of Twin Peaks coffee at the brewery was amazing!

“It’s tricky trying to work out what process we were going to use. Going through that tastings, we had a look at a couple of set-ups that we thought might work… it’s always interesting trying to adapt our processes for something that we don’t normally do.

“We have a couple of vessels at the brewery with steam jackets that we can use to control temperature. We basically made a whole heap of coffee bags full of the coffee grinds, heated the water, added the coffee in, agitated it, and we just tasted it through the process. When we were happy with where it was, we transferred it and crash chilled it down to two degrees,” says Ross.

When asked about how it all went for him, Tom has two words.

“It was such a good collaborative process. We were coming at it from a very coffee angle, day in, day out we just taste coffee. Different coffees, different flavours, different roast profiles but to be able to then shift a bit to collaborate with another brewer to produce a different flavour profile and how that coffee is going to marry with the oats, or the cocoa nibs as well, was really interesting and fun. It was just a great process.

“For this beer we needed a coffee that provided a rich backbone, good structure, low acid and loads of chocolate. Immediately we went to the Brazil Sertao (coffee) that we use day in day out. What it adds to our core range, our Profiler and Deli blends, is similar to what is brings to this beer.”

It’s fair to say, everyone was pretty happy with the results. With some old school Jazz filling the air in the background, we crack a few cans and have a taste.

“We’re super stoked with the final product. It was amazing to be able to taste the beer and coffee individually, and then to see how it married together. To taste it today was awesome. You get the chocolate, the toffee notes… it’s really robust. The oats deliver that velvety mouthfeel. There’s good aroma and I even get this cola texture type element that’s surprising, but I really like it.”

Luke is equally impressed, noting how each individual element shines through.

“I’m blown away. This is the beer you want for this type of year. It strikes a great balance between something that’s chocolatey and rich, but still very drinkable. It’s sessionable… and you can really taste the individual elements that are coming together.”

“We wanted a robust flavour. I think the big thing is that amazing coffee aroma that it hits it off with. I think the malt we included also has some of those really nice roasted coffee, mocha and chocolate type of characters as well, it’s amazing what you can get out of those raw ingredients. I think there’s a really nice bitter-sweet finish to it as well, and a really nice velvety nice mouthfeel from the huge amount of oats we put in it too,” says Ross.

Early days in mum’s back shed

After a few beers, I ask Tom about the early days. He explains that Twin Peaks started back in 2014, and before their current Morley set-up, the business was run from a space where many businesses find their feet.

“I bought a roaster, put it mum’s shed and spent most nights learning to roast. It was as simple as that. Twin Peaks came about from an obvious place, a love of coffee. But it was really born and bred out of a coffee shop I owned. I wanted to take that plunge and learn more about the craft.

“People really got on board and embraced a new thing for us. The more that we evolved, our product improved and our core ethos developed over time. We’ve had café partners over seven years now, and they’ve grown with us… not just within their own walls but with their coffee program.

Dawn Patrol is here for a good time, not a long time. See below for you local stockist, in store and on tap.

WARNERS AT THE BAY

Yeow! Check out our new podcast