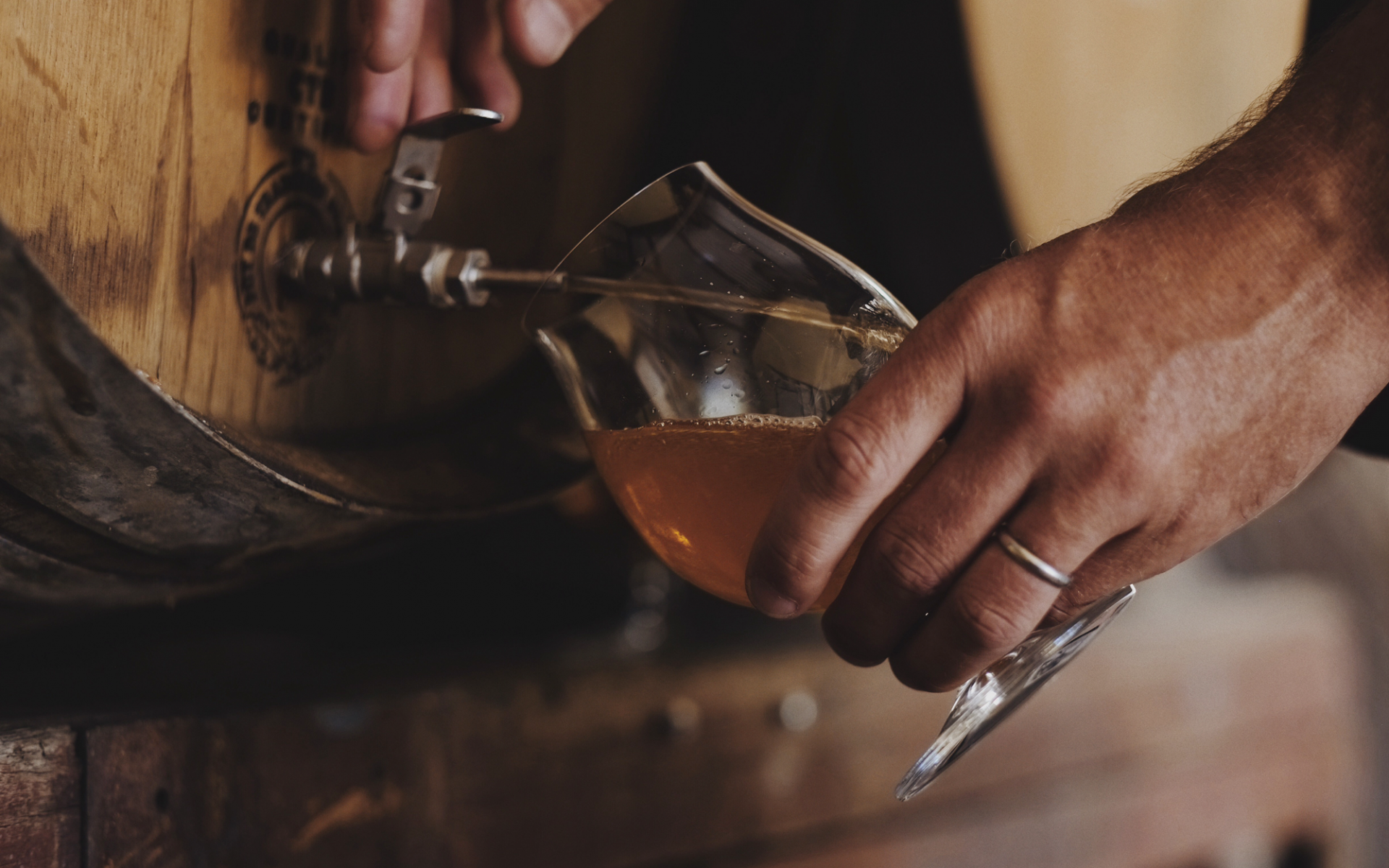 For Aaron Heary, the passion for brewing doesn’t stop when the time card gets punched. It evolves into something personal, something original and something beautiful. In the quiet of his garage he employs his vast knowledge of brewing styles to delve deeper into the science of barrel aging beers. Our seasoned Brew Chief is a veteran of the vats earning the respect of his peers and fellow brewers.

Who are you?
Aaron Heary.

What’s your gig and what does it involve?
Brew Chief/Chief Operating Officer, Gage Roads – I’m responsible for the entire operations side of the business. As a veteran at the brewery, tell us a bit about Gage Roads from your perspective?
We are a no bullshit, emerging, small WA brewery. People sometimes laugh when I say “small”, but Sierra Nevada are considered “medium” and they make more beer in 6 months than we have done in the past 10 years. When I first started at Gage, the brewery was cobbled together with a bunch of second hand equipment and a 1960’s soft drink filler! Now we’ve built it into a state of the art brewery with the best equipment money can buy. We haven’t pigeon-holed ourselves into any one beer style, we just focus on making great beer that people want to drink. We brew everything from quality dry-hopped ales, high quality premium lagers, out-of-the-ordinary limited releases, and everything in between.

You’re a bit of a backyard brew-master, what’s currently brewing in the back shed?
All the home brewing I do is with my brother Daniel, he’s been a Senior Brewer with Little Creatures for 15 years so he’s no slouch. About six months ago I filled a bunch of 225L port barrels at Gage Roads and took them home to mature them on the oak (yes, full barrels are damn heavy!). I’ve got a Saison which I pitched with some friendly bacteria to sour off, a Flemish Red that’s pretty much at the beginning of its souring journey and a dry hopped 6% IPA that’s wooded nicely. I kept the bacteria well away from that one! The flavours sound incredible, but how do they taste?
We recently dry-hopped the IPA barrel with 4 kg of Mosaic, Enigma and Chinook. It came up insane! On the nose, it’s super fruity with guava and pineapple, and the Chinook has given it a real grapefruit character too. The wood was coming through nicely behind the hops and those fruitcake characters you expect from the port were in the background of the aroma. I was worried about it being too sweet on the palate – barrel aged beers tend to sweeten up a bit if there isn’t any microbial activity – but a very slight Brett secondary ferment dried out the beer and the tannins from the wood have balanced the sweetness. Due to the micro oxygenation coming through the wood, the hop characters don’t last too long in the barrel either. I kegged off 50L and we had it at our Gage Roads Christmas party. My brothers and I also enjoyed a few over Christmas dinner at Mum’s place too!

The process is quite ‘unique’, do you enjoy pushing the boundaries?
I started playing around with barrel aging beers in 2008, it’s definitely a passion of mine. For thousands of years it was very common for breweries to use wooden barrels for storage and brewing purposes so it’s not as unique as it might sound. Many of the characters we are looking for in wooded beers today were actually quite commonplace in the middle ages, however, they were almost all lost during the stainless steel lager revolution of the past couple of hundred years. Brewers all over the world are now rediscovering wooded beers, but I understand that not too many of them have 225L barriques aging in their garage at home! Given your experience, what advice would you offer first time brewers?
Start simple to eliminate variables and build from there. Start with a Cooper’s kit and a liquid ale yeast smack pack from a homebrew store. Once you can achieve a clean ferment, and are able to bottle it to produce uninfected, drinkable beer, then you’re ready to move onto adding other variables. Temperature control is vital, but it’s cleanliness that’s key.

Let’s get down to it, what’s the weirdest thing you’ve tried to brew?
What was weird 10 years ago is commonplace now, the craft beer scene is full of innovators and is moving forward so quickly. In 2003, I was working for a brewery in Vancouver BC and we brewed some pretty out there 13-18%  Belgian ales with some fermented fruits and other goodies in there. No one was really doing that in Australia back then, and you had to be really careful drinking them – they hid the booze so well. At the time, Paul Mercurio was also working in Vancouver doing choreography for Will Smith on the filming of the I, Robot movie. One night he came in and discovered these awesome Belgian ales…  he ended up singing and dancing on the tables! Your first ever brew? Did it suck?
In my early 20’s I tried to brew a Pilsner. It was a an absolute sulphur bomb. We’d thrown a huge party and it came out at the end of the night. My housemate complained that I was a shitty brewer and should never brew again!

What’s your favourite style of beer right now? How come?
After a recent visit to Czech Republic I’m really digging my Pilsners right now, but generally I can’t get past an epic IPA – gotta’ be fresh though,  and really dry with high sulphate water and mega dry-hopped character. I couldn’t really tell you why, it just is… Your passion and knowledge is supreme. Where would you like to see the craft beer scene in ten years?
One of the largest changes I’ve seen developing over the past 10 years from drinkers is their  genuine interest in beer styles and how beer is made. I’m not talking about the beer geeks, I’m talking about the general populace. This has led to passionate and educated beer drinkers demanding innovation, integrity, and boundary pushing from their brewers. There is still a long way to go though. Unfortunately over the past half century, the big brewers have done a great job of dumbing down beer, all selling the same type of lager with different labels on it. I think craft brewers have done a fantastic job in recent times of re-educating drinkers about just how varied, unique, interesting and exiting beer can be. We’ve needed this much healthier dialogue between brewers of beer and drinkers of beer for a long time and I’m really looking forward to it continuing.